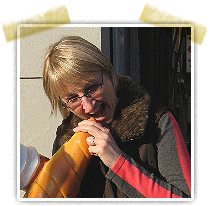 A Year of Inconvenience
For one year, I'm making everything from scratch and forgoing convenience foods. Join me on my journey! By Pam Mehnert on October 19, 2010

Strike up the band, uncork that champagne and start tossing the recycled paper confetti – I’m half way through my year of inconvenience. Hooray! Okay, so week twenty-six wasn’t filled with the fanfare of celebration by any means. I’m writing this post from the Seattle/Tacoma airport, watching as people board their planes to exotic places. Meanwhile I’m heading back to the land of brats, beer and cheese.

If I had to be anywhere in the continental US at this point on my journey, there are not too many places more food-centric than Seattle. Homegrown, local, organic, and artisan foods are about as abundant here as the multitude of independent restaurants available to cook them. Without a kitchen to cook during the trip, I’ve eaten about a dozen meals out this week. Most every menu offered something that was sourced locally, crafted in small batches, or was grown in a sustainable way. And these foods are commonplace - you don’t have to go out of your way to find them. Pinch me now - I’ve found food utopia!

Once such utopia (or should I say foodtopia) was a restaurant in the Freemont neighborhood named appropriately, Homegrown. The large chalkboard menu guided you through an incredible lineup of unique sandwiches and salads, followed by another chalkboard that identified which products were sourced locally, what made them sustainable, and what was grown organically. I split the pork tenderloin sandwich that was built with a coffee and cayenne rubbed pork loin, pickled red onion, apple butter, mixed greens, and sage aioli on toasted French bread. Along side of the sandwich we also split a beet and goat cheese salad with shaved fennel, on a bed of arugula, lightly dressed with a lavender vinaigrette. Yes, it was that good. I’ve read reviews for the restaurant since and they indicate that the line is usually out the door. It was pretty crowded when we got there, so we walked the neighborhood a bit and came back. I’d highly recommend this place next time you travel there.

The primary reason for my trip was to spend some time with the staff at the Puget Consumer Co-op (known as PCC) along with a few of my Outpost colleagues, so most every moment and conversation was focused on food. PCC is one of the largest consumer food co-ops in the country, with nine locations in the Seattle area – so for us food geeks – this is the Mecca of natural foods. Whenever I travel I think about whether I could actually live in the city or town I’m visiting, and a great grocery store is always the top of my list. It wouldn’t take a big stretch of the imagination to picture myself living in Seattle with PCC in the neighborhood.

Obvious to all foodies who have been to Seattle, one of the highlights of the trip is always a visit to the Public Market. Pike Place Market has roots going back to the late 1800’s where it was commonplace for food vendors to gather into one area to sell their foods. The history of the market is rich and detailed, involving a multitude of ethnic food cultures as it expanded throughout the next half century to take up the six or so city blocks where it is established today. While many people today associate the market primarily with seafood and produce (which are both awesome), some of the highlights for me included watching the artisan cheese maker, drinking the craft beer, eating the French pastry, smelling the incredible aroma of fresh flowers, and bringing home the one ingredient difficult to find locally in Wisconsin – chanterelle mushrooms. They packed my one-pound of chanterelles “to go” and while not perfect some twenty-four hours later, they were certainly good enough to sauté and use on dinner that evening.

Much to my surprise, after six months of inconvenience I didn’t really need to have a frozen pizza waiting for me at home that night after a long day of travel. I had the sauce pre-made and frozen as well as some mozzarella cheese that was hanging around in the freezer. My recipe for dough came together quickly as the other ingredients defrosted, and chanterelle pizza was the perfect end to a perfect trip. Looks like I have a bit of foodtopia right here at home.