A Year of Inconvenience
For one year, I'm making everything from scratch and forgoing convenience foods. Join me on my journey! By Pam Mehnert on August 18, 2010 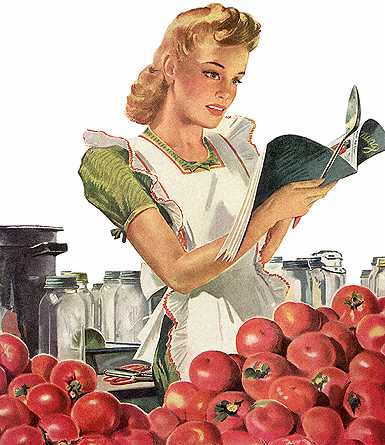 Thirty-four pounds of tomatoes – yes that’s five hundred forty four ounces of raw material my friends, about three quarters of a bushel. My hour of reconciliation had finally arrived, for it was time for me to look those luscious red beauties right in the stems and let them know who was the boss. Their time had come to meet their maker. That’s me, the maker of all things tomato.

This was one of the hottest weeks of the summer- in fact I think they said we had the most continuous days of high heat (with an uncomfortable heat index I might add), in years. What better time to pick to stand over a boiling pot of water and skin those little “apples of paradise” as my German Grandmother would have called them. On the bright side I only planned to freeze them, as I still haven’t worked up my canning courage, so the boiling water phase was short lived.
Do you have any idea of how many cans of tomato sauce, pasta sauce, diced, crushed, or pureed tomatoes you go through in nine months? Me either. Last time I bought a case of diced tomatoes at Outpost’s annual Truckload Sale they seemed to last forever, in fact I would have sworn they were multiplying in the basement because the next year’s truckload sale came along and I still had a few cans left. Well summer is my opportune time to plan out what tomato products I’ll need for the next nine months of my food journey, so I took a stab at my thirty-four pounds.

I knew at the beginning that taking a year of my life to explore some of the secrets of food (by cooking most everything from scratch) was going to reveal some things that I would have never considered under normal circumstances. Lesson number one – don’t take canned tomatoes for granted. Working in the grocery industry for the past twenty-nine years, I’ve stocked my share of canned tomatoes on the grocery shelf and spent a lot of time complaining that the cans didn’t stack well on top of each other. Why don’t tomato processors consider the type of cans that stack so they don’t tip over on the shelf? Okay, I digress.

I know many people who complain about the price of canned tomatoes, in particular organic canned tomatoes. Well I’m here to tell you that unless you have a pretty good size garden with nothing but tomatoes growing, and you actually get a good yield from your plants because they didn’t get tomato blight or drop and rot on the ground before you had had time to pick them. Unless that is how you spend your time, the price of canned organic tomatoes are totally worth the price we pay.

I bought thirty-four pounds of tomatoes at about $1.00 per pound (a really great price I might add). Fourteen of the pounds were organic, and twenty pounds were not. I bought my twenty pounds of Romas at the farmer’s market from someone I trusted, which meant I wasn’t going to worry about pesticides since I was going to skin them anyways. So I spent $34 on tomatoes. After boiling, skinning, seeding and processing those 544 ounces of tomatoes, this is what I had:

Okay, so if you’re doing the math that’s about 11¢ per ounce my cost, or if you convert that to grocery store prices you’d pay $1.71 for a fifteen-ounce can of tomato sauce, $3.19 for a twenty-eight ounce can of diced tomatoes, and $3.65 for a thirty-two ounce jar of pasta sauce (and I didn’t include the cost of the other ingredients that went into my pasta sauce). Naturally that also isn’t including the time it took to process and make everything (about five hours including the peeling, seeding, cooking, stirring, chopping, weighing, and packaging).
So I’m not convinced I have enough tomatoes to get me through to next April when I end my year. However, as a self-proclaimed foodie I have to admit that the experience was pretty amazing and gave me a whole new appreciation for my favorite fruit – vegetable – fruit. Take your pick – tomatoes are amazing.

The Recipe – Vita’s Pasta Sauce
In 1989 one of the co-op’s long-time volunteers, Dorothy Cataldo, passed along this pasta sauce recipe to me. Yes, she was Italian, and yes this is one of the best sauces I have ever tasted. She said it came from a restaurant in Cooper City, Florida and had been in that manager’s family ever since the 1800’s when they immigrated from Sicily. Like any good recipe, you need to experiment with the ingredients, adding less salt or more wine and fresh basil to taste – because my friends, every batch of tomatoes has their own personality. Enjoy!

Heat the olive oil in a medium pan over medium heat and add the onion. Cook until softened, about five minutes. Add the garlic and sauté for about a minute or so (don’t let it brown). Add all of the remaining ingredients and continue to cook over medium heat for about 30 minutes, or until it reaches the desired consistency and flavor profile you’re looking for. (I added that last note)